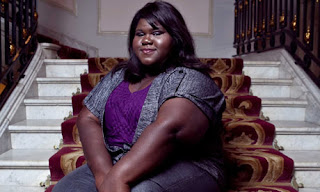 THE HYPE ABOUT THE FILM "PRECIOUS" is really getting me stoked. We have an annual film festival sponsored by one of the colleges in the city that I live in, and there will be a viewing this week. One of our professors told us in class on Saturday that the department of social work on campus is trying to arrange for a special screening for the students. That would be so exciting! I have posted a link to a trailer for the film on YouTube. If you'd like to check it out, click here.

A segment on today's "Sunday Morning" featured an interview with the character who plays "Precious." Gabourey 'Gabby' Sidibe said that while she is not her character, she knows "Precious." Sidibe also said she never dreamed she would be in films, mostly because "it doesn't happen to girls who look like me."

What was so remarkable about the "almost famous" actor is that she has incredible self-esteem. She said people have often disrespected her because of her obesity and she yet has been able to find a way to believe in herself, her talents and beauty because she gets that she is the only person who can do that. She said that no one can make her diminish herself. I was impressed by her strength and self-awareness.

This movie is based on the novel "Push" by Sapphire and also stars Mariah Carey, Lenny Kravitz, Mo Nique, and Paula Patton, to name a few. Oprah Winfrey and Taylor Perry have signed on as executive producers which will likely push the film into commercial success. And that's a good thing because it is a wonderful representation of our world. Beyond that, though, it just looks like it will be a great film.

~Ms. T. J.
Posted by psychotherapistinthesouth at 10:31 AM