In THE NEW SOCIAL WORKER magazine, we publish an article on field placement in each quarterly issue. The current issue features an article entitled, "What I Learned From My First Intern," by Tina Landeen Panos, LCSW. Tina offers four lessons that she learned:


You can read the full article by clicking here.

What lessons (expected or unexpected) have you learned from being a field instructor or supervising others (social workers or students)?

If you are a field instructor, student, practitioner, or educator who would like to write about field placement issues, please contact Linda Grobman, editor of THE NEW SOCIAL WORKER, with your idea(s).
Posted by Unknown at 3:02 PM No comments:

Email ThisBlogThis!Share to TwitterShare to FacebookShare to Pinterest
Labels: field practicum, From the Editor, The New Social Worker magazine 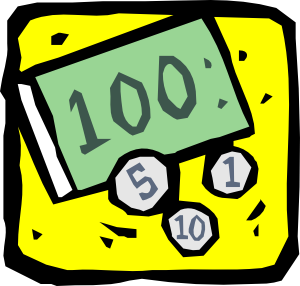 According to this article released yesterday, social work is among the most underpaid jobs in the U.S. At the same time, social workers report high job satisfaction. To quote the article, "Despite the high stress, social workers report to Glassdoor that they like working with people, and get a thrill out of positively impacting the lives of others. Their tender hearts don't translate to loads of legal tender, though."

The amount of student loan debt (see http://www.socialworker.com/home/Feature_Articles/General/Loan_Forgiveness_Eases_Debt_Burden_for_New_Social_Workers/) combined with salaries that are lower than those of other professionals makes for some difficult decisions when it comes to accepting a social work job offer. How does one reconcile the desire to do good in his/her chosen profession with the need to make a livable wage?


What has your experience been? Have you found that you have had to turn down a dream job because of the salary?  Have you found effective ways to get the salary that you feel you deserve and need?  Have you found salaries to be acceptable in your area of practice and geographic region?
Posted by Unknown at 3:08 PM 4 comments:

Email ThisBlogThis!Share to TwitterShare to FacebookShare to Pinterest
Labels: From the Editor, job interview, salaries

College, civil rights, the past, and the present

Earlier this week, my alma mater, the University of Georgia, commemorated the 50th anniversary of its first African American graduate. Mary Frances Early received her master's degree in music education from UGA on August 16, 1962. The commemoration took place in the Fine Arts Building, a place I knew well during my undergraduate years.

Charlayne Hunter and Hamilton Holmes were the first black students at UGA in 1961. However, Early transferred to Georgia from the University of Michigan and was the first of these pioneering students to graduate. She eventually became the first African American president of the Georgia Music Educators Association, and later was the head of the music department at Clark Atlanta University.

Later, around 1968, the first African American professor arrived on the UGA campus. That professor was Dr. Richard M. Graham, a pioneer in the field of music therapy, who became my professor and a major influence in my life in the same school of music from which Mary Frances Early had graduated.

In addition, Dr. Maurice Daniels, dean of the UGA School of Social Work, spoke at the commemoration, addressing the historical significance of Early's graduation on the civil rights movement. Dr. Daniels arrived at the University of Georgia during the time that I was a graduate student there.

When I read about the commemoration, I felt proud that both my undergraduate and graduate schools were involved in this historical event. By the time I arrived at UGA, there was a lot of diversity within my school and on campus overall. How could it be that it had been within my own lifetime that African American students were even admitted as students there?

It sometimes seems that the beginning of the civil rights movement was a long time ago, but 50 years really isn't that long at all.  When I look around in everyday life, I think we have come a long way, and still have a long way to go in the area of race relations and civil rights. I see way too little diversity and way too much misunderstanding in our society.

I must say that within the social work profession, I see a great deal of diversity, and I see great efforts to move us toward a society in which there is respect for cultural and social diversity, and in which discrimination and exploitation are eliminated. These are part of our professional, ethical mandate to promote social justice and create a society in which basic human needs are met for all people.

What are we doing to go to that next level of true diversity, understanding, and social justice in everyday life?  What more can we do?  When will it be EVERYONE's ethical mandate as a human being?
Posted by Unknown at 2:23 PM No comments:

Email ThisBlogThis!Share to TwitterShare to FacebookShare to Pinterest
Labels: civil rights, From the Editor, race, UGA 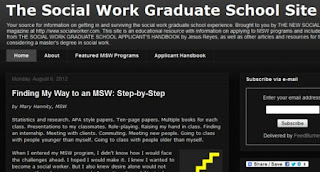 I am happy to announce the redesign and relaunch of The Social Work Graduate School Site! This site is brought to you by the publisher of THE NEW SOCIAL WORKER and focuses on issues related to applying to, getting in, and making the most of social work graduate school programs. I will be posting articles, excerpts from THE SOCIAL WORK GRADUATE SCHOOL APPLICANT'S HANDBOOK, and other items of interest to those who are seeking a master's degree in social work (and beyond).


Please check out the site, and be sure to "follow" and/or subscribe, so you will not miss anything!
Posted by Unknown at 11:08 AM No comments: