Baby on the beach 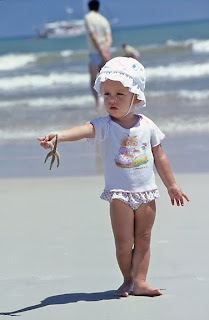 MY HUSBAND AND I drove to the beach this afternoon. It was a beautiful day with blue sky and big, fluffy clouds that were being blown around by a gentle wind. We parked the car and walked on the pier.

I paused to people-watch, and I spotted a woman first power-walking on the sand, then quickly veering to the right, with a look of concern on her face. I quickly saw what she was seeing: a tiny little girl, approximately 2 years old, in a wet suit was crying, whimpering the words, "Daddy ... daddy."

The women and I --she on the beach and I on the pier above -- caught one another's eye, and we instantly became the "village" that would, if necessary, bolt into action to rescue this lost child who was dangerously close to the waves of the Atlantic Ocean.

In a few seconds, the child turned toward a familiar sound, her father's voice, and I bolted to the other side of the pier to witness her reuniting with her father. As he hugged her and walked her back to the spot where he and a woman were seated, I thought to myself that they had let the little girl stray too far from "camp," in my opinion.

A year ago, I would have been hyper-critical of these guardians. I would have thought they were not taking "good enough" care of their child.

After a mere two months at the family and children's services agency where I am in field practicum, I am rethinking my stance. Yes, I believe they were being careless with the child who was in their charge. But, I guess I have seen too much already. So much abuse and neglect and domestic violence. The behavior of this family at the beach seems almost negligible in the face of what I now know goes on in the world.

Is this growth? Is this too much tolerance?

In the words of Pema Chodron: "There's a discrepancy between our inspiration and the situation as it presents itself. It's the rub between those two things --the squeeze between reality and vision-- that causes us to grow up, to wake up to be 100 percent decent, alive and compassionate."