THE NEW SOCIAL WORKER is honored to be a finalist in NASW 2013 Media Awards--YOU Can Vote! 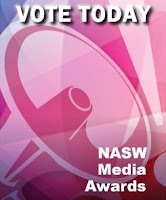 I am honored to announce that THE NEW SOCIAL WORKER magazine, along with SaraKay Smullens' article in our Fall 2012 issue on burnout and self-care, is among the finalists in the 2013 NASW Media Awards.

In 2012, more than 750 social workers and others voted for nominees. Voting is now open for all who wish to vote in the 2013 awards.  You do NOT have to be an NASW member or a social worker to vote!

I am so proud of SaraKay's article, "What I Wish I Had Known: Burnout and Self-Care in Our Social Work Profession," and I thank all the many, many social workers and others who have contributed to THE NEW SOCIAL WORKER magazine over its first 19 years.  To be nominated for this award is quite an honor.

Please go to the 2013 NASW Media Awards page to see the complete list of finalists and to cast your vote.  We are listed in the "Best Magazine or Magazine Article" category.  Be sure to hit the "Submit" button at the end of the ballot after you have made your choices!

Email ThisBlogThis!Share to TwitterShare to FacebookShare to Pinterest
Labels: awards, burnout, From the Editor, NASW, The New Social Worker magazine